The S2V club presents for its channel a new program of current events and entertainment called “Son 2 Versiones”. It will develop content from the world of gaming and sports with the aim of offering a first version,, the one known by the community, and the second, that contrasts or provides a different or added focus. In this way, we will have testimonies, interviews, guests and documentary research that gives the news treated in the program that extra content.

“Son 2 Versiones” will have an aproximation duration of 30 minuts and a weekly broadcast every Thursday at 14.00 hours in our Twitch channel. Its goal is to build audience loyalty and encourage the community to come to this space through a fresh, innovative and striking content. In this way, we are looking for differentiate the program from others on the platform marking a personality that gives it a value of its own.

The program wil be presented by Raúl García, always known like “Don de Gentes”, one of the most visible faces of the esports in Spain and with a wide range of gaming. In addition to participating as caster in numerous competitions and events linked to games such as League of Legends and Clash Royale or and shooters like Call of Duty, has been involved in world-class actions such as Worlds, organized by Riot Games.

The presenter himself, as editor of the program, has declared: “I come to generate controversy. If I’m here it’s because I think it’s something that will like to and entertain a wide audience at Twitch. “Son 2 Versiones”, are usually the one we see and the one they don’t tell you about, and we will offer both”. 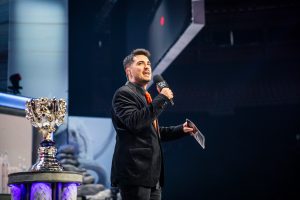